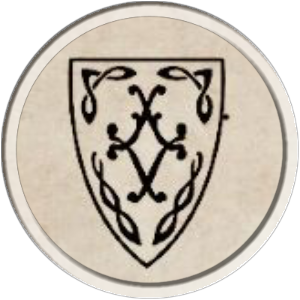 Location & History
Widespread throughout the far northeast of the Flanaess, this somewhat unruly “guild” was formed by Thorketil Tostisson of the Frost Barbarians in 232 CY. Little known to far from the Griff Mountains, The Shield are respected by numerous other “southern” guilds.

Organisation & Entry
Joining the Guild costs 50 GP, members are expected to make a suitable tithe whenever possible but there is no set monthly fee. Those that regularly make suitable donations can expect to rise through the ranks and thus gain other benefits such as accommodation, the right to purchase from the armoury and so on.

Specific Advantages
Weapon and armour smithing is 10% faster than standard PHB times (page 65).
Weapons and armour if purchased from the armoury are 10% cheaper and there is a 1d4% chance that they are masterwork" and thus have a +1 non-magical bonus (to hit or AC).

Obligations
The Shield insist on a code of conduct but have few proper proper laws. This code is basically defined by four main virtues: honesty, hospitality, courage and loyalty. Besides those, The Shield also admire cunning and luck. Although cunning is more of a vice than a virtue, the way it’s used or the results obtained from it wind up bringing reputation to the man who uses it. The true hero has all these characteristics in abundance, besides being a deadly warrior, a sly poet, an enthusiast of partying and drinking and, sometimes, a deep connoisseur of magic.

Honesty: The word of a member of The Shield, given in oath, contains the supreme truth. Once the word of a warrior is given it will be kept at any cost, even one’s own life. An oathbreaker has no friends.

However, in everyday life, some situations allow an oath to be broken. In the case of an oath demanded with cruel intentions or to bring harm to the one who gave his word, breaking the oath is allowed. However, if the man who gave his word insists in fulfilling the oath, it won’t be his honour to be affected, but the deceiver’s.

Hospitality: For a northman traveller it’s important to know that, in friendly territory, he’ll always have food, shelter and protection. Thus every good man has the obligation to treat a guest in the best way possible and to wait nothing else in response.

Courage: It seems redundant to talk about northman courage, mainly in battle. However it’s important not to mistake it for self-denial or disdain to one’s own life. A northman values his own life and will not endanger himself for a cause that he knows to be lost. The unnecessary death is the death of a fool, but the death of a hero is the one that makes the difference.

An important aspect of courage is determination – the powerful desire to see something happen, no matter what is in the way. Once a hero decides a course of action, nothing withholds him. To take a decision is to give his word to himself. A man without decision is not honest to himself and has no honour.

Loyalty: Loyalty commands the relation that exists between the individual and his group. The loyalty of a man belongs to his family, his jarl and his king (or althing), in this order. This order of priority can be modified by an oath of personal loyalty – for example, a huskalar will swear loyalty to his jarl, whose command will become his main priority.

The duty of a follower is to do anything that his jarl commands him to (this includes dying) and to place the interests of his jarl above everything else. The Jarl, from his part, is duty-bound to his followers and, in many cases, this is a more difficult role. He must behave in a good manner and be a just leader if he means to have men following him.

Cunning: This is the most curious rule of behaviour. Using artifices that deceive an opponent is much appreciated, as they demonstrate the intelligence, wit and malice of the Frost Barbarian people. However, this type of trick must be applied only against those opponents who prove undeserving of respect. The line between cunning and cowardice or disloyalty is narrow and not quite defined, and the reputation for cunning can be changed into notoriety for lie, deception and cowardice. To be smart is a risky move.

Luck: Without luck a man can be honest, hospitable, courageous, loyal and smart, without ever obtaining anything, and without earning reputation or fame. A man can be born rich and lose everything, but a man born with luck never goes hungry. Heroes who have luck are good men to follow.