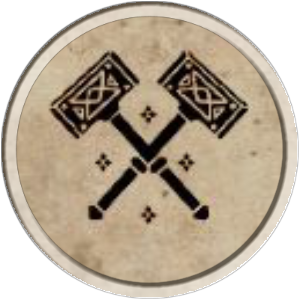 Location & History
First organized in 360 CY by the adventurer Roger de Flor, the Iron Legion was primarily composed of rugged veterans drawn from various companies that were active during the War of Greyhawk. De Flor and his mercenaries contracted themselves to the Duchy of Urnst and then to the Free City of Greyhawk. Stalwart defenders of the City, the Iron Legion has headquarters in Greyhawk and large strongholds (“Chapter Houses”) in most of the major cities of Furyondy, Urnst, Nyrond and Ulek.