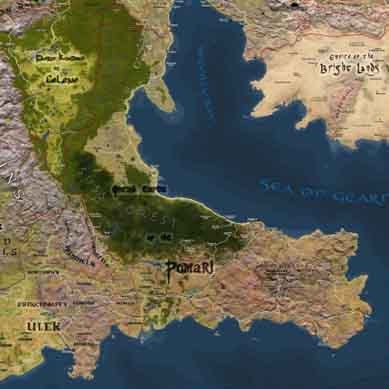 Before the Great Migrations, the Pomarj was mainly a desolate region populated by primitive Flan tribespeople who revered equally primitive deities of earth and sky. Eventually, small numbers of outcast Suel settled the region. The region received little notice from the rest of the world for centuries, remaining largely isolated.

In 295 CY, King Tavish I of Keoland and the Prince of Ulek, seeking to exploit the Pomarj’s mineral wealth, raised an army to invade and subjugate the region, an endeavor which was accomplished in the span of a few years. The Pomarj was divided up into roughly a dozen small baronies, which were awarded to favored families of the Keoish throne. These subfiefs were administered by and under the protection of the Principality of Ulek. Over the next few decades, mining brought great wealth to these petty barons. In 305 CY, the town of Highport was constructed on the north coast to share these riches with the rest of the Flanaess.

In 461 CY, the Principality of Ulek had withdrawn from Keoland to gain palatinate status. The barons of the Pomarj at this time, being subjects of the Prince of Ulek, had no voice in the Council of Niole Dra. Dissatisfied with their position, the Pomarj barons broke with the Principality of Ulek in 463, declaring their own independence. The barons ejected the Prince’s dwarven garrisons and declared Highport their capital. Despite this apparent unity, however, each baron ruled his state independently, and feuds were common. Many barons assigned themselves grandiose titles, such as archbaron, duke, or prince. The baron of Suderham, even went so far as to dub himself “King of the Drachensgrabs.”

In 498 CY, the Hateful Wars began as an alliance between Celene and the Ulek States sought to drive the orcs, goblins, and other evil humanoids from Lortmil Mountains. The Prince of Ulek invited the former barons of the Pomarj to join the alliance, but the lords of the Pomarj refused, fearing reabsorption into the Principality and seeing little reason to involve themselves in what they viewed as chiefly a conflict between non-humans. By 510 CY, the Hateful Wars were over, but this conflict would have great repercussions for the Pomarj.

In 513 CY, hordes of surviving orcs, goblins, and other evil creatures from the Lortmils, having few places to hide from their elven and dwarven foes, fled to the Pomarj, emerging from the Suss and falling upon Highport in a destructive rage. In a matter of months, all of the other former baronies, save the hidden city of Suderham, also fell to the humanoid invaders.

Over the next few decades, the Pomarj became essentially a backwater filled with orcs, goblinoids, and other evil creatures, as well as a haven for human bandits, pirates, slavers, and other criminals. Various humanoid tribes carved out territories. Any good humans left lived as slaves, or else waged a losing guerilla war against the invaders.

By 564 CY, the last king of Suderham was assassinated by the Slave Lords, who turned the town into their base of operations. The Slave Lords managed to bring much of the Pomarj under their control, but by 570 CY their power was broken.

During the Greyhawk Wars of 574-584 CY, a powerful orc chieftain named Turrosh Mak united the Nedla and other humanoid tribes of the Pomarj, and invaded the surrounding lands, bringing much of the Wild Coast and the Principality of Ulek under his control. Mak named his “empire where none has stood” the Orcish Empire of the Pomarj. Though much of the land west of the Jewel was reclaimed by the Principality of Ulek in 586 CY, Mak continues to hold power in the region, and his empire shows no signs of decline.

Geography
The Pomarj proper is a peninsula dividing the Azure Sea from the Sea of Gearnat. It is bordered by the Jewel River to the west, the Suss Forest and Woolly Bay to the north, with the Straights of Gearnat to the east and the Azure to the south. The borders of the Empire are slightly larger, extending north along the Wild Coast, stopping only a few leagues south of Safeton. The Empire’s western border once stretched as far as the foothills of the Lortmils, but much of this land has since been reclaimed by the Principality of Ulek.

The peninsula is dominated by the Drachensgrabs, a range of hills which ascend to the height of mountains at their highest point. The soil of the land is poor, making cultivation of crops difficult.

Artifact of Evil by Gary Gygax describes “the fair shores of the Pomarj, where snow never fell.”

Religion
The orcish pantheon, led by Gruumsh, is heavily favored in the Pomarj, as are Beltar, Syrul, and the goblin pantheon, led by Maglubiyet. The cult of the Earth Dragon is also a strong force on the peninsula.

Languages
The most widely-spoken languages in the Pomarj are Orcish, Common, and Goblin.

Government
The Orcish Empire of the Pomarj is a dictatorship which oversees various humanoid tribal leaders. The dictator’s power is enforced by his large personal army made up of warriors from his own orcish tribe.

The national capital is Stoneheim.

Administrative Divisions
The Orcish Empire of the Pomarj is made up of numerous territories, the vast majority ruled by non-human tribal leaders.

As of 591 CY, the Pomarj’s chief of state is His Most Ferocious Majesty, the Despot Turrosh Mak, who has held power since the Greyhawk Wars.

The Pomarj’s coat of arms is blazoned thus: Argent, a medusa’s head caboshed gules. This device was traditionally used by the goblins of the Pomarj, before being adopted by Turrosh Mak’s government.

In addition to the state’s official heraldry, several of the humanoid tribes have traditionally carried their own devices:

Currency
The Pomarj has no standard national coinage, but a number of official and unofficial currencies do exist, minted by most cities, towns, and powerful non-human tribes. Note that some of these currencies are out of date.

Transportation
The roads of the Pomarj are not well-maintained, which is not surprising for a nation ruled by orcs. The land does boast a few ports however, including Highport and Blue.

Military
The Pomarj can field large numbers of non-human troops, and many are trained at the capital city of Stoneheim. The Pomarj has no navy to speak of, though a number of pirates and mercenaries are employed to harry the shipping lanes of the Sea of Gearnat and the Azure Sea. It is rumored that the Pomarj can also call upon the Scarlet Brotherhood for aid.