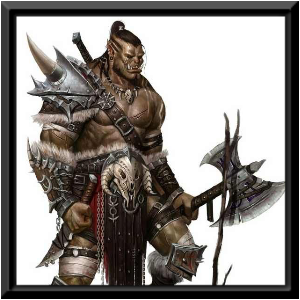 Half-orcs are tall, on average, somewhere from 5’9" – 6’4" (1.75 – 1.93 meters) and heavily muscled, usually weighing around 155 – 225 pounds (70 – 102 kg) making them a little taller and stronger than humans on average. Most half-orcs had grayish skin, jutting jaws, prominent teeth, a sloping forehead, and coarse body hair, which caused them to stand out from their human brethren, though their canines were noticeably smaller than a full-blooded orc’s tusks. Half-orcs as such appeared bestial to humans, though amongst orcs they were considered human-like physically. Half-orc hair was most often black, though it grayed very quickly with age. In general, half-orcs did not live as long as humans, maturing by their sixteenth year and often dying before their sixtieth.

Half-orcs that have lived amongst orcs have often picked up the common orcish tradition of ritual scarring. Half-orcs with such a background did not look upon scars as marks of shame or as unattractive blemishes, but rather as marks of pride that demonstrate their skill and bravery in battle. On occasion, however, scars were used for a darker purpose, with orcs marking half-orc slaves with scars in the same manner a rancher might brand cattle.