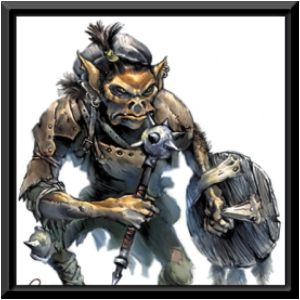 Goblins, called jebli in the Flan tongue or chebi in the Suloise language, are a fairly weak race of savage, bestial, barbaric humanoids. Goblins are the most commonly-encountered race of goblinoid, a general term applied to a number of related races.

Goblins typically engage in night-time raids upon their enemies, sometimes riding upon worgs. They often find themselves dominated by more powerful creatures. In combat, goblins favor overwhelming odds, ambushes, dirty tricks, and similar tactics. Goblins often go to war with kobolds, as they share similar territories. Xvarts often act as intermediaries between goblins and kobolds, usually being bullied by the goblins and in turn taking out their frustrations on the kobolds.

Goblins are found in numerous places throughout the Flanaess.

Goblins of the Flanaess stand about four feet tall, and tend to have lanky frames. Their eyes, coming in various hues of red, orange, or yellow, are typically glazed and dull. Skin color is found in all shades of yellow, orange, and red, with all members of an individual tribe usually being roughly the same color. Goblins typicially clothe themselves in garments of dark leather, with colors usually being solid-looking and drab.

Goblins are normally dominated by more powerful creatures, but all goblins swear fealty to the local goblin king nonetheless.

Goblins have their own pantheon, led by Maglubiyet. Other members of the goblin pantheon include Bargrivyek and Khurgorbaeyag.

Gobins speak their own language, Goblin, a tongue shared with most other goblinoids.