Silver armour and blue cloak mark this professional soldier as a Knight of Hieroneous. Always on duty he is rarely seen with helmet off and sword unbuckled.

Osson is a lifelong professional soldier in the service of the Prelacy of Almor, a loosely aligned state known for its spirit of freedom and justice. A descendent of noble landowners, with estates spanning the Great Kingdom, Osson himself was born into poverty in the tenement slums of Chathold (the family land was confiscated long ago). He has had to work hard to make his way in the world, but this has given him an affinity and understanding with ordinary people, who respond positively (and perhaps with some surprise) to this charasmatic but down to earth leader.

One of the marks of his common upbringing is his enjoyment with bar games and gambling. Although frowned on by his Order, they tolerate this slight indiscretion as his skill at the tables often results in more money coming back than first went in.

Despite his poor upbringing Osson was somehow given entrance at age 16 to Chathold’s Military Academy, an elite school with eye watering fees. Inducted into the Order of Hieroneous, Osson’s noble lineage and appreciation of hardwork, discipline and loyalty marked him out for rapid promotion. On graduation he was knighted as a full paladin with almost undue haste. Fast tracked into foreign service he has worked for a series of noble masters, including nearby Nyrond and the Iron League, which has given him valuable connections amongst the ruling elite across the region.

After a period of years Osson was summoned back to Chathold, where he enjoyed prestigious, albeit demanding, roles. His most recent post was in the direct service of the Prelate himself, as a Captain in his personal guard.

Nobody quite understands why this noble, but somewhat impoverished, Knight has now ended many miles from home, scratching out a living with a collection of short lived mercenary jobs. It seems a long way from the elite career his training had prepared him for. 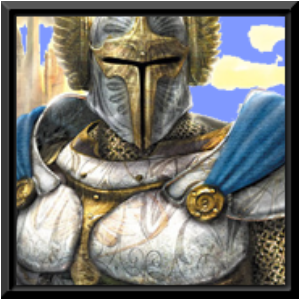