The passage on the other side of the door leads into a large chamber that is dominated by a large pool. Troglodytes emerge from the shadows and attack the party as soon as their lanterns disturb the darkness. A huge reptile emerges from the pool and when it engages Slim Jim, the source of the strange deaths along the Pelyra and around Darkshelf becomes clear. Emitting a burst of powerful electricity, the snarling beast is armed with vicious teeth and horribly long talons. The battle is prolonged by more troglodytes attracted by the sound of battle and a robed figure bearing a mace and wearing an odd symbol in the form of a copper disc.

Searching a small cave just to the west, Halvar finds an ornate camphor box that contains two vials of a strange blue fluid that fluoresces faintly when shaken. Papers on a crude desk seem to be some form of ledger, though what is being tallied is unclear.

Though the party have discovered a route upwards into the mines, they decide to explore the rest of the caverns and uncover a number of refuse pits connected to narrow shafts that rise up to the mines. Zombies and ghouls prowl these areas but they are no match for the warriors, and Osson and Oseanor are adamant that these unnatural creations must be destroyed. Olmdor and Einar are only too happy to oblige!

There is little of any value and the party wisely decide against searching to extensively for treasure. They are aware that it is only a matter of time before their presence is discovered and though they have taken the precaution of hiding the bodies of the creatures they have defeated, the absence of the robed man must surely be noticed at some point. Besides, one of the refuse pits had been colonized by some decidedly unhealthy looking fungi and the air is ripe with noxious smells; disease is a real threat. However, they have found an odd black metal pyramid. Small, a few inches in size, the object has clearly been used in unholy rites and Oseanor grimly sanctifies the object before passing it to Ossun to look after. There are no markings on the object to indicate who it belongs to or exactly what it was used for.

One of the last caverns that the group discover is home to a large thermal pool that is inhabited by huge frogs. Each one is the size of a small dog and there are many of them. The party decide that since the creatures offer no threat, they should perhaps be left alone and they retreat back to an area where they can rest before venturing up into the mines. As Elbereth settles herself quietly in a corner to study her rune-covered bones, Olmdor organizes the watch … 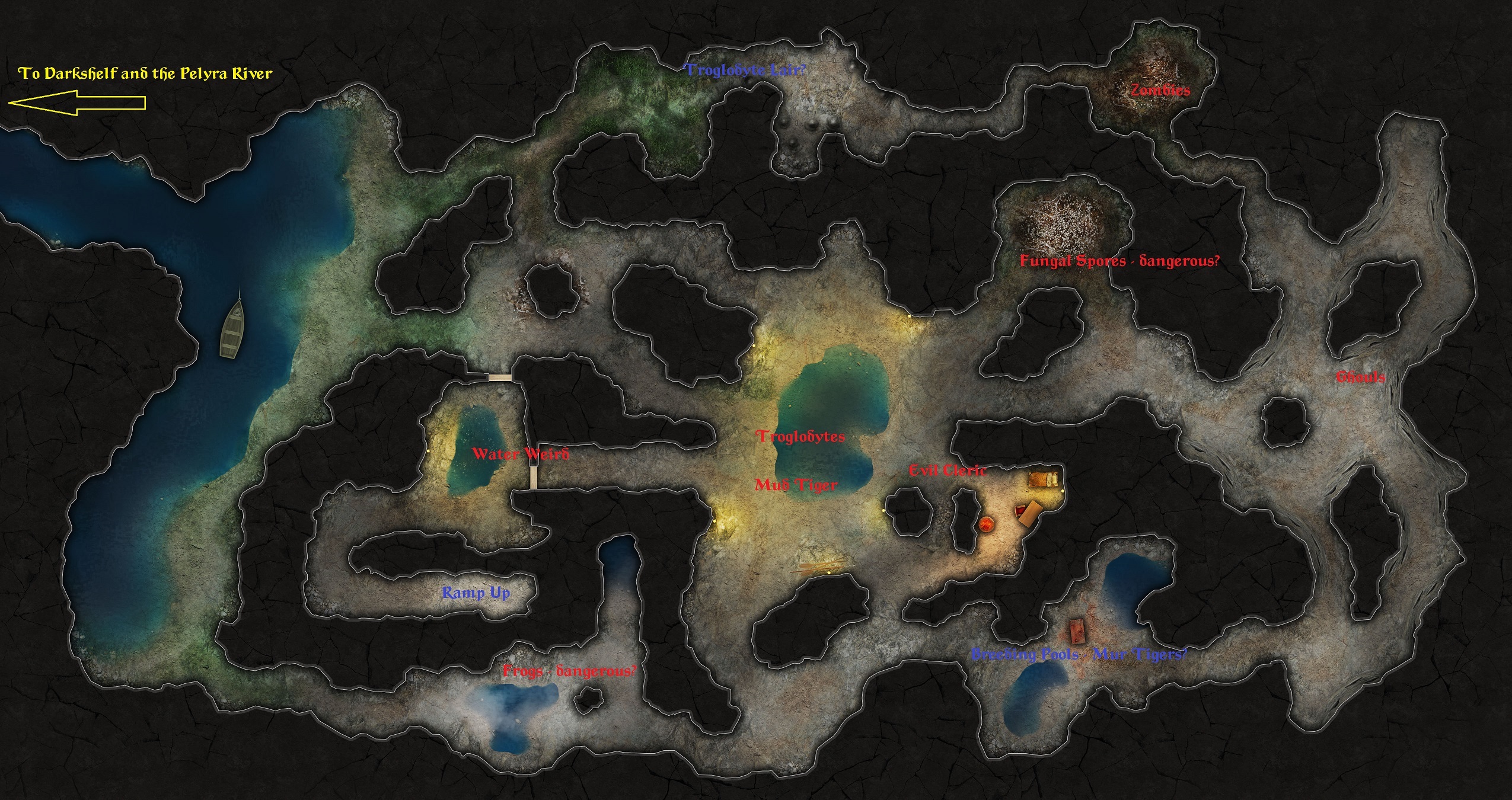