The Overlord of the small village of Darkshelf has become increasingly agitated by the rumors circulating amongst the miners that fill the Orc’s Head tavern.; all is clearly not “right” at the local quarry. Though granite extraction has increased under the relatively (three months) new overseer (Bazili Erak), the miners mutter into their ale about “strange moanin’ sounds from below” and what they fear are the sounds of chains being rattled. Bazili is clearly quite hard on his dwarven clan-brothers who work the deeper shafts during the night-shift.

Neistor was hoping that a recent (two weeks ago) raid on a small slaver’s camp (led by Bazili) would do much to the villager’s general unease and fear but sadly, a spate of strange attacks along the nearby eastern bank of the river has made even the tough miners fearful. The last attack was barely a few hours from the village; a young village girl, “Ringe”, was killed and badly mauled when she went out to catch the small crabs that make their homes in the rock pools.

Summoned to meet the Overlord in his small office, the companions are asked to investigate the unhealthy rumors that are festering in the mines and perhaps investigate the strange deaths as well. Neistor sent one of his men into the mines a week ago to investigate but after some promising initial reports of a secret jetty, “”/characters/kwon-chi" class=“wiki-content-link”>Kwon-chi" has been silent. Bazili announced that a small vein of gold (in addition to a quartz strike) had been discovered and Neistor suspects that the mine overseer is using the hidden dock to smuggle gold out.

The party agree a fee for their services (600 gold pieces) and head into the village to gather as much background information as they can. Talking to the patrons of the Orc’s Head tavern, they learn little more but the pair of miners that they gently interrogate (“Otis” and “Veran”) confirm Neistor’s tale of strange sounds and shadowy figures at night.

The village’s apothecary is unable to add much more information about the mine but he does know a little more about the people killed by the strange beast that has been striking around the village. The creature is clearly large and all of the attacks (six in total) have occurred near the river or the coastal bay that Darkshelf perches on. A number of the bodies have been subject to a massive electrical charge; some of their jewellery had become magnetized. He tells Oseanor that the most recent victim was a 6-year old girl called “Ringe”.

Father Owein at the village church is persuaded by Osson to sell the party a potion of healing at a reduced cost (150 gold pieces) and he allows them to view the body of poor little “Ringe”. An investigation of the site where the girl was killed suggests that the creature is very large and probably some form of reptile or amphibian: four large webbed feet, large 3-inch long talons and what could be a 3 or 4 foot tail.

Wary of a direct approach on the quarry and its formidable three-storey guard block, the party decide to investigate the river and the link with the strange deaths and perhaps discover the hidden jetty that “”/characters/kwon-chi" class=“wiki-content-link”>Kwon-chi" reported. Hiring a boat from the village, the investigators head up the wide Pelyra River and begin to nose their way down one meandering tributary after another.

By mid-afternoon, they finally discover a swiftly flowing passage that heads into a low roofed cavern that is so close to the quarry that it surely must connect. The cavern is eerily quiet but the wooden jetty and the presence of a small rowboat betrays its use. A quick search of the boat tethered to the jetty reveals a pair of rusted manacles – substance to the rumours that Bazili is a harsh foreman?

Beaching their own barge, the party head down a narrow passageway that leads into a small cavern. There are obvious exits in all four cardinal directions but a door to the south is the most promising. The air to the north is particularly foul with a strong scent of ammonia or something like it. Listening carefully, the party can hear the distant sounds of steel on steel and steel on rock.

Approaching the door, Halvar is caught in a trap that whisks the unfortunate rogue up into the air, tightly noosed around his ankles by a hidden wire. Alert to the danger that loud noises underground pose, the companions wait quietly in the shadows until Halvar finally manages to break the wire and drop, cat-like, to the ground before the inviting doorway.

Listening carefully, the party can make out distant sounds of chanting – some form of prayer or ceremony perhaps. They can also hear a fountain or what sounds like one. The door has an intricate three-lock mechanism and selecting one at random, Halvar attempts to pick the lock. The alarm that is triggered seems to have no effect; no guards emerge from the other three passages, no far off torches spring into life … the cavern and its passages remain unsettlingly quiet. Only the distant sounds of steel on rock can be heard and as the door is eventually opened, the alarm bell mutes.

The cavern on the other side of the door has an exit to the south that seems to lead to the upper mines and a locked door to the east. The chamber is dominated by a large pool of restless water that swirls around the rocky floor as if there was a fountain or pump present.
As Halvar investigates the door, a large serpent-like shape emerges from the water and tacks. Immune to most of the adventurer’s weapons, the creature eventually succumbs to the flaming torches wielded by Jim and Osson. The arcane balls of energy thrown by Elbereth also see capable of harming this strange beast. Olmdor and Einar are unable to harm the creature but they escape relatively unscathed.

Halvar carefully searches the lock mechanisms when the fight is over and this time, he selects the correct lock of the three arrayed in front of him to pick … the door clicks open to reveal another narrow passage …. 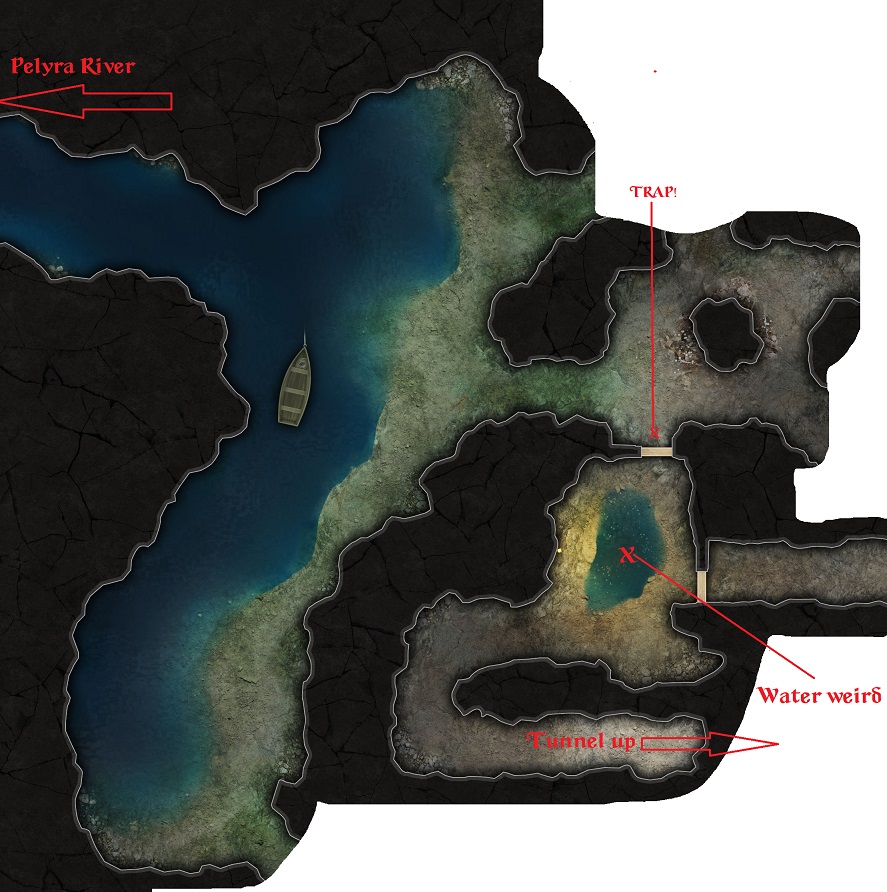 So far the story of Neistor and the villagers is checking out. As villagers of Heironeous they follow the way and must be protected. Our number 1 duty is to stop these evil attacks.

In my travels I served at the Court of Count Eddri of Idee. They are known for their rich gold reserves and ammonia was used to purify the metal. If the story of gold mining is true, then it is in the North passage that the gold will be found.

The water weird was guarding these doors, protecting something that was not meant to be found. The true secret of these mines perhaps lies down the passage to the East.